Butt Lite 6IX is over.  As noted in a previous blog, I am happy and sad all at the same time.  After a year of preparation, a week of non-stop activity and travel, a surprising ending and now I have returned to Atlanta and some level of normalcy.

We accomplished our goal - to put on a successful rally that challenged the riders.  One they would be happy they entered.  Safety and fun are the two top goals and for the most part, that was accomplished.  While there were a couple of minor tumbles, our thoughts are with Derek and a speedy recovery.  The man seems to have nine lives.  We are so glad he is home with his family and recuperating.

Wildlife seemed to have gotten the memo and stayed out of the rider's way.  Rex and his Harley managed to separate a raccoon from his tail.  He also had a magic coyote encounter.  But other than that, no animals were harmed in the production of this rally.

As the Rally Masters laid out this two-legged ride, it was obvious that there was no obvious winning route.  That made us happy.  The last thing we wanted was something predictable and boring.  A leg one route that included 140 bonuses stretching from Georgia to Maine to Ontario to Missouri and finally ended in Minnesota challenged every single rider and created a very nice, level playing field.  The challenges continued on Leg 2 with a large clump of bonuses in Detroit and a trail of them to Oregon, New Mexico and everywhere in between

We had no idea what would happen.  Until the phone started ringing.  No matter how much planning you put into the rally, the bonuses, the coordinates, the instructions - stuff happens that you can never predict.

One of the first bonuses was Eddie's bench in Crestlawn Cemetary in Atlanta.  The riders had to write down what is engraved on the top of the bench.  So imagine our surprise when a rider called to report that a rally flag had been left at the bench. Since no photo was required, the flag wasn't needed.  Hmmmm....  Mr. Winterer - Butt Lite and Iron Butt Rally veteran was able to retrieve his flag and with that always present smile on his face, continued his ride.

Next up, just a few miles away is The Surrender of Atlanta historical marker at one of the busiest intersections in the city -  Northside Drive and Marietta Street.  It is a big marker and sits inches from the curb facing Marietta Street.  Our rider couldn't find it.  He was at the intersection.  The marker was in it's usual position.  After a lengthy discussion to ensure he was where he was supposed to be, I told him to look for the M Street apartment building which is directly behind the marker.  Oh....

It soon became apparent to Rally Staff that we had some reading comprehension issues.  Actually, it was worse than that.  Technology is used heavily to route the riders to the correct location but many weren't reading the rally books that explained what it was they were looking for.  This continued throughout the rally by newbies and veterans alike.

When we got the call from Ken Meese that he had misplaced his rally book we were stunned.  Ken is one of the best riders in the country and not known to make this type of error.  But I guess it just goes to show that it can happen to anyone.  He managed to still finish leg one in 5th place.  That is an achievement and I, for one, was impressed.

Try traveling 3,000+ miles in a mini-van with four other people (or three, depending on the day) and trust me,  you will be starved for entertainment.  So, whenever the phone rang we would all hold our breath.  First we wanted to make sure the rider calling was safe.  Once that was determined, then we could hardly wait for the entertainment value of the call.

Marvel, AR gave us some amusement.  And then there was Annie the Railroad Dog.

Connie Gabrick HATES dog graves.  It all started with Floyd, The Town Dog in the Iron Butt 5000 and continued on BL6IX with Annie, The Railroad Dog.  Too bad Connie didn't try for Sideways' grave on the Georgia Tech campus.  She might have found it just as elusive.  Unlike Floyd, she was able to eventually find Annie, but she wasn't happy about it.

Connie also gave us a good laugh after her GPS took her up a goat path in Rocky Mountain National Park up to Milner Pass.  Once there she asked David Smith, "How did all these Harley's get up here?"  Important tip - the GPS does not know all.  Listen to the voice in your head.

Speaking of dogs - leg 2 was built around twelve bonuses that related to Lewis & Clark's New Foundland dog, Seaman.  Seaman was the only animal to survive the trip.  I had never heard of Seaman before this rally but now I am fascinated with the story of this dog.  The comparisons between a dog who explored North America in the early 1800's from coast to coast and today's long distance riders is something I plan on studying further.

Of course, with so many bonuses related to Seaman, you would have thought it would be clearer to the riders that they were looking for a DOG.  But no.  One rider went all the way to Seaside, OR in search of a Seaman statue only to get there and still wasn't completely sure of what he was looking for.  After several calls to the rally van, he finally realized Seaman was right in front of him the whole time.

There are so many stories to tell about this rally - there is no way to write them all here.  And that is exactly what makes it so much fun.  I love the stories.  I never tire of hearing them.

Major congratulations to our winner Alex Schmitt - now a two-time winner of Butt Lite.  He overcame an accident and some damage to his bike (thankfully not to him) to finish over 1,500 points ahead of second place finisher Ken Meese.  Our very own "Top Gun", Josh Mountain, stealthily came in 3rd.  Watch this man - he is good.  Congrats to the rest of the top ten and everyone who finished.  You deserve to be extremely proud of your accomplishment.

More thanks than I can come up with to Bart Bakker, Rick Miller, John Pedrow & David E.B. Smith.  Well done.  And we didn't kill each other!!

I'd love for the riders of Butt Lite 6IX to share their stories here.  It is simple - write it in an email and send it to lerbes.buttlite6ix@blogger.com .  It will post automatically.

And for all of you who asked us if there would be a Butt Lite 7.  Here is the deal - Never ask a woman who has just given birth when she is going to have another baby.

Frankly, i didn't know exactly what to expect when i got voluntold to help Lisa with the Buttlite.  I've been part of the Buttlite since number III- the one at the Live Oak Resort.  Being cooped up in a van with 4 other people for long periods of time was not on my personal bucket list.
I suspected our four personalities would clash sometimes [they did], and we'd be as happy as clams [we were]; we'd eat well, have some pie and good laughs at our own misfortunes.  in the end, it all came together- riders were happy [as opposed to David's "and you will be sad" speech], everyone is safe and accounted for, and there is already chatter about a Buttlite IIIIIII.
As for the riders- i expected a lot of them;I always do.  Riders are only competing against themselves and success is measured by the width of their smile, the grip of a handshake and not some hunk of crystal.  I tried to be witty and pithy sometimes; didn't work always but there is one rider who I must apologize to for my "three reasons" repartee.  I am sorry; it was meant to be witty and in retrospect it was stupid.  I never like "wrong answers" and this one was rather egregious.  I vow never to repeat that mistake.  So please accept my apology.
But my hat goes off to John Pedrow- i wish every rally I had a part in  had a John Pedrow on staff.  Tireless and efficient, without ever asking for a "thanks".   So "thanks John"- you made the whole experience smoother than you could have ever imagined.
To the rest of ya, thanks for the laughs and the new memories; I enjoyed nearly every minute of it.
Rick, former back seat Rallymaster.
Posted by Lisa at 8:39 AM No comments:
Email ThisBlogThis!Share to TwitterShare to FacebookShare to Pinterest 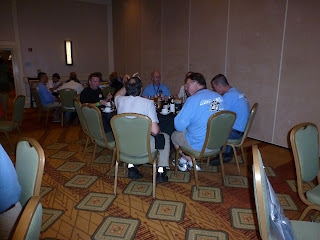 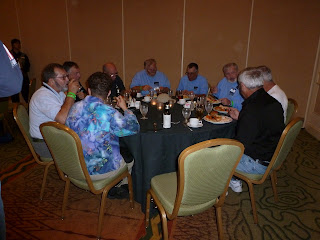 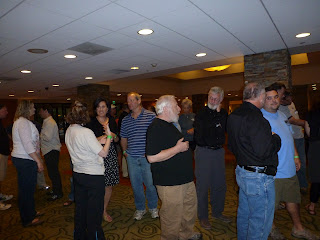 Posted by Lisa at 2:09 PM No comments:
Email ThisBlogThis!Share to TwitterShare to FacebookShare to Pinterest

It was great to see Strangers Ron & Carrie Hanson at the finish in Denver.  Carrie acted as our "unofficial" photographer.  As usual, I forgot something - like getting a group photo of the top 10.  Oh well.

Please click on the link to view the whole album:

http://www.flippedbit.net/gallery/thumbnails.php?album=248
Posted by Lisa at 1:26 PM No comments:
Email ThisBlogThis!Share to TwitterShare to FacebookShare to Pinterest

For those who want to rally at home, the route sheets and data files for
Butt Lite 6IX can be found at

Posted by Lisa at 8:31 AM 2 comments:
Email ThisBlogThis!Share to TwitterShare to FacebookShare to Pinterest


Posted by Lisa at 11:17 PM 2 comments:
Email ThisBlogThis!Share to TwitterShare to FacebookShare to Pinterest

Quote of the Day

It's always much bigger when you rotate it sideways.-  Jim Owen.
Posted by Lisa at 3:12 PM 1 comment:
Email ThisBlogThis!Share to TwitterShare to FacebookShare to Pinterest
Older Posts Home
Subscribe to: Posts (Atom)